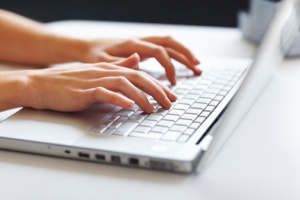 In the ‘70s, you could bring your laptop to meetings – if you had well-developed biceps. Those babies weighed in at 55 pounds (and cost about as much as a car). I’m pretty sure they could play 8-tracks. Like to see your MacBook Air do that. Now that devices are feather-light – and ubiquitous – the issue of their attendance at meetings is a bit more challenging. So, do you encourage, allow, tolerate, or just have people check their devices at the door?

The question really is this: do computers help you focus on the task at hand? Or do they facilitate multi-tasking, which is Latin for “trying to do a whole bunch of stuff at once and doing a crappy job because the brain isn’t configured to focus on more than one activity that requires conscious thought at a time”?

Let’s say Suzy brings her computer in. She does a terrific job taking notes, efficiently and effectively capturing what’s going on and organizing it. Maybe she hasn’t been designated as a note-taker, but she can create a list of issues that need follow-up, as well as action items. At the end of the meeting, Suzy shoots an email to everyone, reminding them what’s been agreed to, who’s responsible, and what the next steps are.

Not only is this an incredibly efficient use of a computer during a meeting, but, really, you should be giving Suzy some type of stipend. She’s a keeper. OK, say she only takes notes for her own use. Fine. She’s keeping it straight in her own head, keeping it organized, and recording what she’s responsible for. Good for her.

While Suzy’s typing away, Bill over here may be drifting. “This part of the meeting isn’t really relevant to me. I’m going to check some emails. And possibly TSN quickly. Maybe check eBay for a Canada Goose coat.”

Old Bill is missing an opportunity to engage fully. No, maybe this part of the agenda does not pertain directly to his work, but could he have contributed his expertise to his colleagues? Could he have offered help, advice, or support for a coworker? (Who, at a later meeting, may be inclined to return the favour for him)?

As the meeting chair or organizer, it’s up to you to look at the design. Have you created a meeting in which people want to stay engaged – and not use their computers to pass the time? Maybe technology’s not the problem at all. Maybe it’s you! Go back to the beginning: what are you trying to accomplish with this meeting – and who absolutely needs to be there?

I’m all about coming to meetings without computers, without Blackberries, without iPads. This stance can elicit pushback with employees. In that case, simply ask: “Why does a no-computer policy annoy you? Can you give me a valid reason why you should have a computer here? Yeah? Then I’ll grant it.”

That way, it puts the onus on the employee. Have them tell you why it’s essential to the purpose of the meeting. Moreover, have them explain to themselves why it’s essential, so they can hold themselves accountable. It’s not you clamping down on them or impinging their Internet freedom; it actually makes sense. Meetings can be more productive – and shorter! – when everyone’s engaged.

This can be a chance for people to realize, “No, it’s not all about me. During this hour, it’s about the team, and I need to do what’s best for it.” It can also be a chance for organizers to re-invent their meetings and re-think their guest lists. There should be accountability on both sides!

Now that muscle tone and price tag isn’t a barrier to computer ownership, meeting chairs need to really think about their expectations. Can computers help advance a meeting’s agenda – or hinder it? Often, the answer is, “Yes”! The question now is, “How can we ensure computers advance the agenda?” And if they can’t, it’s OK to leave them behind – just for an hour.