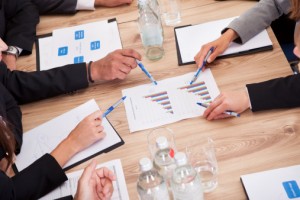 Delegate does not mean relegate. Delegating is empowering; it’s productive; it’s very Warren Buffett. Buffett’s biographer Roger Lowenstein said of the billionaire CEO, “He picked the chorus line but didn’t attempt the dance.” Then there are the leaders who relegate, or abdicate their responsibilities. They don’t attempt the dance; they don’t pick the chorus line; they don’t attend the performance. But they’re always there to pick up the awards and accolades!

When you talk about delegating, you’re really talking about great leadership. You have to provide the vision, direction, and clarity around what needs to be done. Then you have to get out of the way. Teams are much more engaged when they own tasks, when they can take them on and add their signature to it. As Lao Tsu said, “A leader is best when people barely know he exists, when his work is done, his aim fulfilled, they will say: we did it ourselves.”

Delegation not only empowers a leader’s direct reports, but also their direct reports, and so on. Employees have more loyalty to their managers than to those further up the line. If their manager owns a part of a project, his/her team becomes more engaged as a result. He/she owns it; now we own it.

When leaders abdicate, they wash their hands of the situation. That’s not the “get out of the way” we meant! You have to ensure that your people are on message, on vision, on strategy, but then, once you are aligned, you trust them to do their jobs. At the same time, you must remain in the loop and available for feedback and assistance. When I was at Atlantis, for instance, we had our weekly Monday morning meeting. At 8:00. In the morning. On Monday. It’s hard to compete with the allure of the pillow and the snooze button, and we weren’t coming close. At the same time, we needed something to get us focused for the week.

Instead of me running the meeting, the employees took it over. Not like a mutiny. We delegated. And they owned it. First change: no more 8:00 AM meetings. Everyone was behind that move. But there were other changes as well, most notably in the levels of engagement and focus we saw. When we had meetings – they were fun, and as people took turns planning and running them, they tried to outdo each other and create more engagement, and more value.

One more inspirational quote for you to embroider on your couch pillows, courtesy of Ronald Regan, who stole it from Harry Truman: “There is no limit to the amount of good you can do if you don’t care who gets the credit.”  Share the spotlight by sharing the responsibility … you know it’s not as hard on the ego as it sounds! In fact, leading a team to find its own success is one of a leader’s most significant accomplishments.