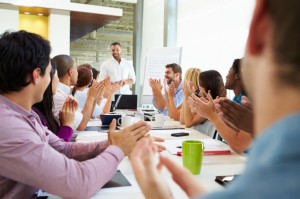 Your heart thumps in your chest; your breath is short and shallow. Your palms start to sweat, and you wonder if you can run fast enough to get away. From what? A rabid dog? A poisonous spider? A clown? No, your kid’s grade three class. Public speaking, whether to a group of 8 year olds or a gathering of senior executives, triggers a primal fight-or-flight response in nearly everyone. Great speakers are not immune; they’re just able to overcome the natural urge to crawl into a fetal position. You can too.

Fake it til you make it…

In her TED talk, social psychologist and Harvard professor Amy Cuddy describes the nearly paralyzing fear of speaking that threatened to derail her education. A professor told her to give every talk she could: “You have to fake it. And eventually, one day, you’ll realize that you’re not faking it anymore.” That’s what you have to do; the following tips will help you become a better presenter. Until then, fake it.

You can have some crap in between, but you need a compelling opening and a clean close that brings it all together. The end should always circle back to the beginning. It’s like giving your audience a parting gift: you’ve wrapped up this presentation into a neat little package that they can, hopefully, use in their own work and lives. And speaking of closing, that’s my cue.

As nerve-wracking as public speaking can be, the exhilaration and sense of accomplishment for a job well done (or, at first, a job simply done) is just as intense. Your heart will still race, and you’ll still have that momentary impulse to flee. Ignore it. It’s not like a clown is chasing you. If that happens, run. Run.